The band formed in 2013 and the founders of the band, the singer Majda Mária Guessous and the artist of the sitar, Szabolcs Tóth first met in the Academy of Music.
The musical world of the band is diversified by more special authentic folk musical intruments played by two other musicians: Iván Barvich and Gerzson Dávid Boros.

Members of the band like Mesi all linked in a special way in the cultural space outside of Hungary. Szabi Toth sitar artist, award-winning composer of songs also helps in shaping Meshinda. Indian master, Pt. Rajeev Janardan adopted son. Barvich Ivan multi-instrumentalist musician of the band, in addition to the Hungarian folk music at home in the Balkan and Turkish music world as well.
Boros Gerzson David eastern percussion since childhood “dream” itself, and has since been actively involved in the Eastern world music. 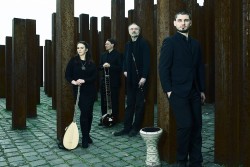 The concert Meshinda mainly traditional Hungarian folk songs and India have come across, however, Pakistani, Turkish, Kurds and Gypsy melodies are present repertoire. This applies not only to the Hungarian music scene for an enrichment, but also opens up new opportunities for cultural diplomacy, because the music ensemble dedicated supporter of similarities between different peoples presentation.
The music is at once filled with lovely to say, games, melodies, improvising.
The band debuted in America (January 2015) was invited to India as well as outside our country. (October 2015).

Members of the band are a total of 159 years old.