The Canlar Group was founded in 1997. According to their own admission, they first played for their own entertainment, and then, in the autumn of 1998, for the encouragement of their friends, they staged for the first time. Since then, they have performed at many domestic and foreign festivals. The band plays classical Turkish music and performs poems by Turkish singers. However, besides the traditional game mode, they are not afraid of making their own processing. 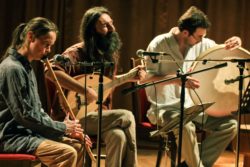